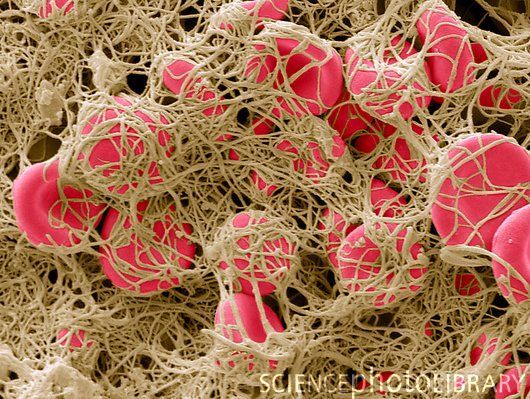 Coloured scanning electron micrograph (SEM) of red blood cells (erythrocytes) trapped in a fibrin mesh (yellow). The production of fibrin is triggered by cells called platelets, activated when a blood vessel is damaged. The fibrin binds the various blood cells together, forming a solid structure called a blood clot. A blood clot is a normal response, preventing an excessive loss of blood. However, inappropriate clotting is a major cause of heart attacks and strokes. 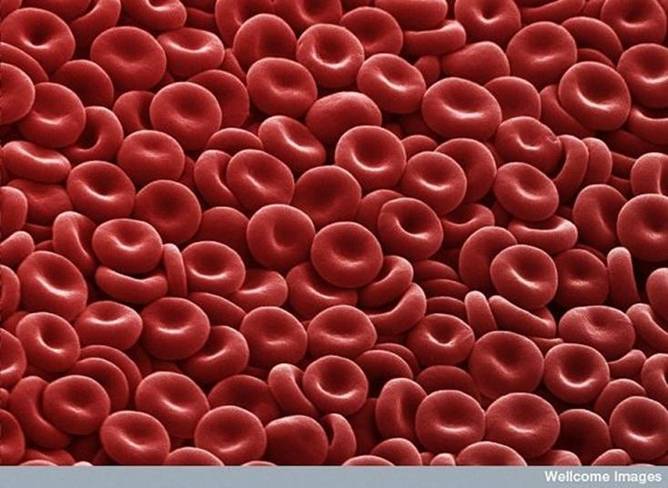 They look like little cinnamon candies here, but they are actually the most common type of blood cell in the human body – red blood cells (RBCs). These biconcave-shaped cells have the tall task of carrying oxygen to our entire body; in women there are about 4 to 5 million RBCs per micro liter (cubic millimeter) of blood and about 5 to 6 million in men. People who live at higher altitudes have even more RBCs because of the low oxygen levels in their environment. A neutrophil (white) phagocytosing (engulfing and destroying) spores from the fungus Aspergillus fumigatus (green). Neutrophils are the most abundant white blood cell and are part of the body’s immune system. Aspergillus fumigatus is common in dust, soil, and on plants and plant products such as hay or grain. It can cause a number of different diseases in humans, including allergic disorder, respiratory infection and invasive disease. 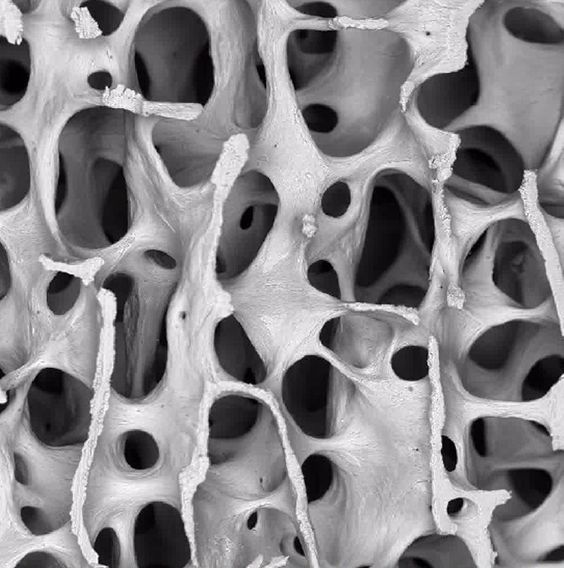 Scanning electron micrograph (SEM) of cancellous (spongy) bone. Bone tissue can be either cortical (compact) or cancellous. Cortical bone usually makes up the exterior of the bone, while cancellous bone is found in the interior. Cancellous bone is characterised by a honeycomb arrangement, comprising a network of trabeculae (rod-shaped tissue). These structures provide support and strength to the bone. The spaces within this tissue contain bone marrow (not seen), a blood forming substance. 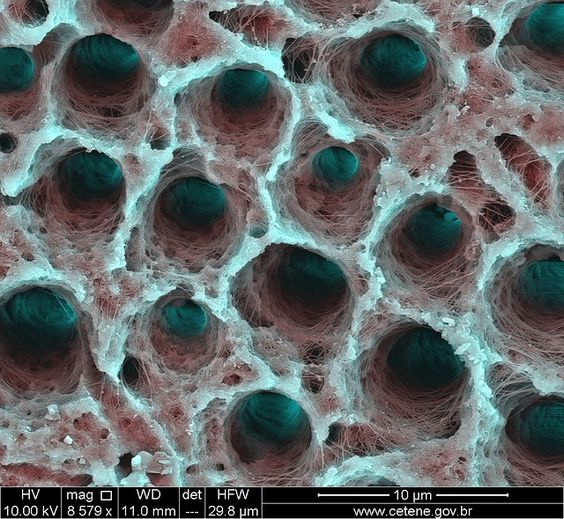 Coloured scanning electron micrograph (SEM) of dentine (substantia eburnea), mineralised connective tissue found in a tooth’s enamel. The pulp, the soft tissue containing nerves and blood vessels that makes up the inner part of the tooth, has been removed to reveal the grey mesh of new and partially formed dentine. This is a thin layer that separates the old dentine from the living cells of the pulp. 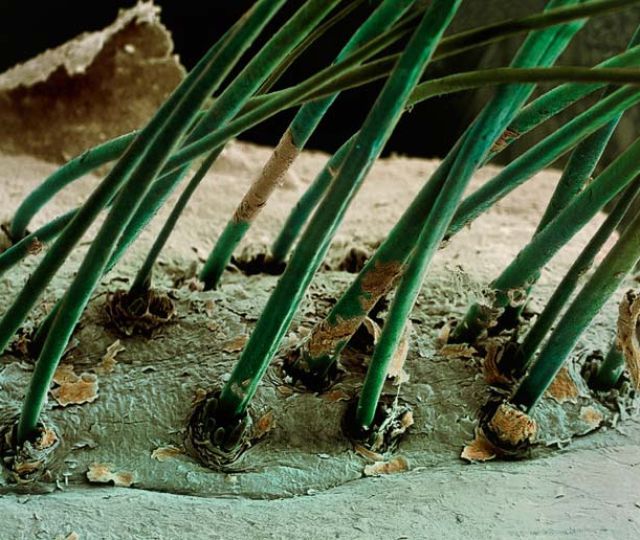 Coloured scanning electron micrograph (SEM) of eyelash hairs (green). The surrounding skin surface has cells which are being shed. Hairs grow from follicles in the under- lying layer of skin (the dermis). The portion of the hair protruding from the skin is made up of dead tissue and the protein keratin. Eyelashes prevent foreign bodies from entering the eye. Coloured scanning electron micrograph (SEM) showing part of the ciliary body (red) and iris (right) of an eye. The ciliary body is a ring-shaped structure that surrounds the iris and joins to ligaments that hold the lens in place behind the iris. It also contains the ciliary muscle that is contracted to alter the curvature of the lens and focus light on the retina at the back of the eye. Magnification: x20 when printed 10 centimetres wide. Coloured scanning electron micrograph (SEM) of a section through the iris of an eye, showing the iris pigment epithelium (IPE). The IPE is a layer of cuboidal cells (pink) that lies behind the iris. Each cell contains numerous large melanosomes (blue), which contain the pigment melanin. The concentration of this melanin is one of the factors that determine the colour of a person’s eye. Magnification: x3,300 when printed 10 centimetres wide. Coloured scanning electron micrograph (SEM) of the human middle ear, showing the stapes (ring-shaped). The stapes is one of three bones (known as the ossicles) in the middle ear that conduct sound waves from the outer ear to the inner ear. Vibrations from the eardrum are passed to the malleus and then the stapes via the incus. The stapes transmits these vibrations to the fluid-filled cochlear of the inner ear where they are converted to nerve impulses. Magnification: x100 Coloured scanning electron micrograph (SEM) of sensory hair cells from the inner ear. These cells are surrounded by a fluid called endolymph. As sound enters the ear it causes waves to form in the endolymph, which in turn cause the hairs to move. The movement is converted to an electrical signal that is passed on to the brain. Each crescent-shaped arrangement of hairs lies atop a single cell. Colour-enhanced image of a taste bud on the tongue. Human tongue has about 10,000 taste buds that are involved with detecting salty, sour, bitter, sweet and savory taste perceptions. 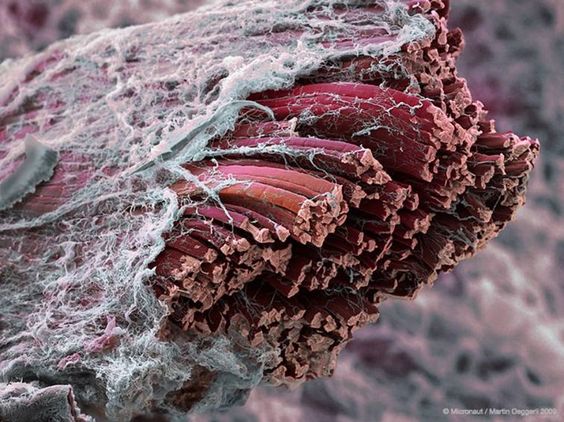 Coloured scanning electron micrograph (SEM) of a skeletal, or striated, muscle fibre. It consists of a bundle of smaller fibres called myofibrils, which are crossed by transverse tubules (yellow) that mark the division of the myofibrils in to contractile units (sarcomeres). Skeletal muscle is under the conscious control of the brain. Coloured scanning electron micrograph (SEM) of a cross section through a spinal cord. It has a central region of grey matter (red) that contains nerve cell bodies and their associated fibres. The outer zone of white matter (yellow- brown) consists solely of tracts of nerve fibres. There is an outer covering of meninges (white), specialized connective tissue layers. The spinal cord is enclosed in the vertebral column (backbone, not seen). It consists of nerves connecting all parts of the body with the brain. Magnification: x45 at 6x7cm size.

Human Sperm on the surface of an ovum

Scanning electron microscopy image of numerous sperm trying to fertilise a human egg. In order to successfully fertilise the egg they need to find their way through the tough zona pellucida, the membrane that surrounds and protects the egg. Credit: Yorgos Nikas, Wellcome Images. Sperm production site. Coloured scanning electron micrograph (SEM) showing sperm cells in a seminiferous tubule of the testis. The tubule has been freeze fractured to show its cross section. Seminiferous tubules are the site of sperm production (spermatogenesis) by the process of meiotic cell division. Sperm begin their development towards the outside of the tubule (beige) and move inwards (pink) as they mature. Mature sperm cells are seen here with their heads embedded in the tubule and their long tails pointing outwards.

Fertilisation of Human Sperm and Ovum Coloured scanning electron micrograph (SEM) of a sperm (blue) attempting to penetrate a human egg (orange). The sperm (spermatozoan) has a rounded head and a long tail with which it swims. Women usually release one egg (ovum) per month, whereas men release millions of sperm in each ejaculation. Only one of these sperm can penetrate the egg’s thick outer layer (zona pellucida) and fertilise it. Fertilisation occurs when the sperm’s genetic material (deoxyribonucleic acid, DNA) fuses with the egg’s DNA. When this occurs the egg forms a barrier to other sperm. Magnification: x700 when printed 10 centimetres wide. Human embryo after zona drilling – coloured Colour-enhanced scanning electron micrograph of a human embryo at day 3. The egg has been fertilised in vitro and has developed to this stage in culture. The coat around the egg (zona pellucida) has been treated with acid Tyrodes solution to make a hole so an individual cell can be removed. This cell can then be used for genetic diagnosis before the embryo is transferred to the womans uterus. This allows the selective implantation of embryos that do not carry the genetic disease in question. Credit Yorgos Nikas, Wellcome Images Coloured Image of a 6 day old Human Embryo Implanting itself onto the wall of the uterus. A colour-enhanced image of the inner surface of human lung. The hollow cavities are alveoli. Each alveolus is a site for gas exchange between the air in the air sac and the blood in adjacent capillaries. Red blood cells (erythrocytes) can be seen through the walls of the alveoli. Oxygen diffuses from the inhaled air across these walls into the red blood cells. It binds with haemoglobin and is delivered to the body’s cells for respiration. Carbon dioxide is returned from the cells to the lungs and diffuses out of the blood to be exhaled. 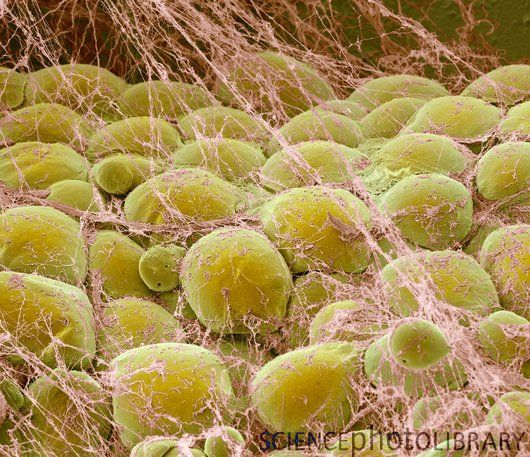 Coloured scanning electron micrograph (SEM) of fat cells (adipocytes, round) surrounded by fine strands of supportive connective tissue. Adipocytes are among the largest cells in the human body, each cell being 100 to 120 microns in diameter. Almost the entire volume of each fat cell consists of a single lipid (fat or oil) droplet. Adipose tissue forms an insulating layer under the skin, storing energy in the form of fat, which is obtained from food. Magnification: x300 when printed Coloured scanning electron micrograph (SEM) of a sweat gland pore (red) opening onto the surface of human skin. This pore brings sweat from a sweat gland to the skin surface. The sweat evaporates, removing heat and playing a vital role in cooling the body and preventing it from overheating. Skin cells can be seen flaking off the skin around the pore opening. Sweat pores vary in shape and size over the body. Magnification: x500 when printed 10cm wide. Coloured scanning electron micrograph (SEM) of a section through the wall of a trachea (wind pipe). The trachea links the larynx to the lungs. The lining consists of mucus-secreting goblet cells (one seen at centre, pink) and epithelial cells (vertical) that are covered in cilia (hair-like). Mucus traps debris, such as dust particles or bacteria, in the inhaled air, while the beating of the cilia moves the mucus and particles upwards out of the respiratory tract. This helps to keep the lungs and airways clear and prevent infection. 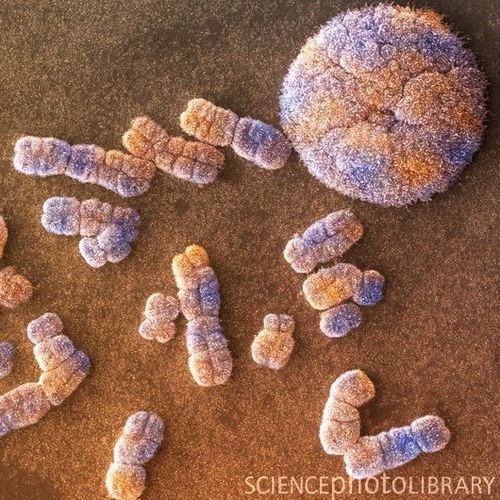 Coloured scanning electron micrograph (SEM). Chromosomes are a packaged form of the genetic material DNA (deoxyribonucleic acid). The DNA normally exists in a non-condensed form in the cell nucleus (upper right). It condenses into chromosomes (centre and lower left) during cell replication. In humans, there are 46 chromosomes, consisting of 23 chromosome pairs. Magnification: x4350 when printed at 10 centimetres across. Coloured scanning electron micrograph (SEM). Hair shafts growing from the surface of human skin. The shafts of hair (yellow) are anchored in their individual hair follicles (not seen) below the surface of the skin. Hair is made up of a fibrous protein called keratin. The outer skin layer, the stratum corneum, consists of dead keratinized cells that detach from the body giving this flaky appearance. Magnification: x140 when printed 10cm high. Coloured scanning electron micrograph (SEM) of a delaminated section of fingernail. The flattened structures are dead keratinised epithelial cells produced by the mitotic epithelium of the nailbed. The dead cells are linked firmly together by keratin attachments forming a hard protective layer. It takes about six months for a fingernail to grow from base to tip. A similar process occurs in the growth of a hair from its follicle. Magnification: x315 at 6x7cm, x220 at 6×4.5cm size. x740 at 8x6inch size. x395 at 10x7cm master size

Cite this article: These electron microscopic images of human body will astonish you, in Amazing Zoology, September 16, 2016, https://amazingzoology.com/these-electron-microscopic-images-of-human-body-will-astonish-you/. Retrieved on October 2, 2022.