Giant dragon flies, as they are commonly called, appears in evolutionary history during Carboniferous period, which lasted from about 359 to 299 million years ago. Very similar in appearance to modern day dragon flies, they are the biggest flying insects that ever lived.

Included in genus Meganeura (large-nerved, which refers to the network of veins on the insect’s wings), a genus of giant insects from the Carboniferous period, Meganeura monyi, and had a wingspan of 2 ft.

It was always a mystery, how these insects grew so big. As oxygen is diffused in insect body through its tracheal system, there is an upper limit on body size. But these insects seem to have overcome that limit.

One theory1 proposed that atmosphere at that time contained more oxygen than the present 20% and this caused the increased size. During carboniferous the rise of vast lowland swamp forests led to atmospheric oxygen levels of around 30 percent—close to 50 percent higher than current levels.

This theory got more appeal with another finding2 that explains relationship between gigantism and oxygen availability.

But the presence of very large Muganeura inscts with large wing spans in Permian (which comes after carboniferous period) when oxygen levels were much lower than carboniferous presents a problem to the oxygen related explanation.

Now a recent study3 reveals another interesting explanation to the problem. The authors of the stud, Verberk and colleague David Bilton focused on how varying oxygen levels affect stonefly larvae, which, like dragonflies, live in water before becoming terrestrial adults. 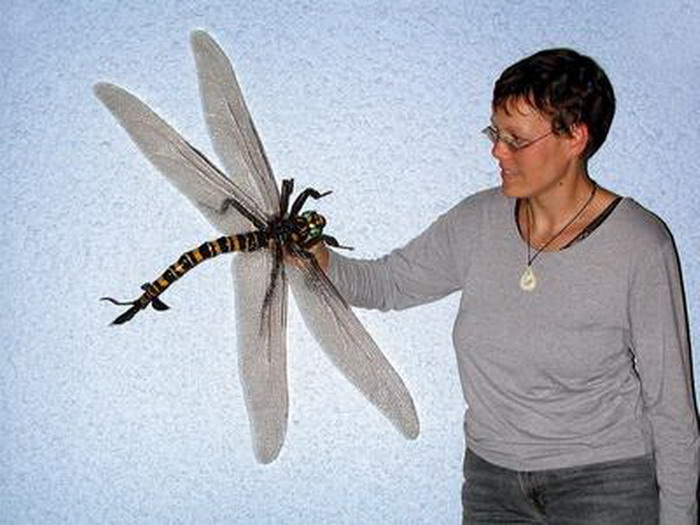 Possible explanation is, unlike adults, insect larvae absorb oxygen directly through their skin and have little control over the amount of gas entering the body. Adult insects can regulate their oxygen intake by opening or closing spiracles.

Most likely the larvae of many ancient insects also passively absorbed oxygen from water and were not able to regulate their oxygen intake. This posed a big danger when oxygen levels were so high because oxygen can be poisonous in large quantities.

One way to decrease the risk of oxygen toxicity was to grow bigger, since large larvae would absorb lower percentages of the gas, relative to their body sizes, than small larvae. When animals grow larger, the surface area decreases relative to volume.

This theory could also explain the presence of large Meganeurid insects in Permian. If increase in body mass was to avoid oxygen toxicity, lower levels of oxygen would not be immediately fatal. But it should probably diminish the performance of larger insects, gradually leading to reduction in size.

Cite this article: What made giant dragon flies in Carboniferous?, in Amazing Zoology, August 13, 2016, https://amazingzoology.com/what-made-giant-dragon-flies-in-carboniferous/. Retrieved on May 22, 2022.