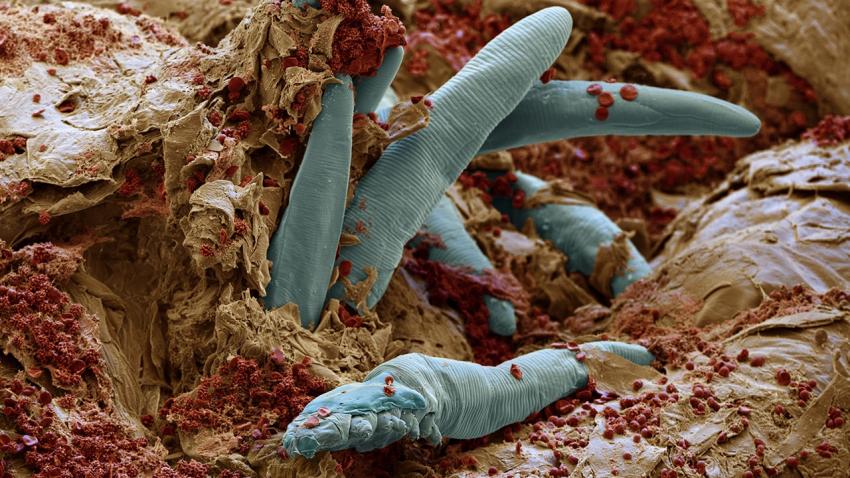 Did your ever realise that microscopic mites live on your face and entire body through out the life time? These mites called Demodex live its entire life in the skin and pores of humans and other mammals.

Of the identified 65 species, two species live on your face, they are Demodex folliculorum and Demodex brevis. Two species live in slightly different areas, D. folliculorum lives in pores and hair follicles and D. brevis prefers to live deep inside your sebaceous glands. The adult mites are only 0.3–0.4 mm long, with D. brevis slightly shorter than D. folliculorum. These mites are mostly seen associated with the face as the face has larger pores and more sebaceous glands. They are also seen else where in the body including genital area and breasts.

These are not insects but comes under class arachnida, a group which includes spiders and ticks. They have eight stubby and short legs in the anterior region and an elongated worm like body. They can only be seen under a microscope. The characters are best observed under a Scanning Electron Microscope. The body is covered with scales for anchoring itself in the hair follicle, and the mite has pin-like mouthparts for eating skin cells and oils (sebum) which accumulate in the hair follicles. The mites can leave the hair follicles and slowly walk around on the skin, at a speed of 8–16 cm per hour, especially at night, as they try to avoid light.1

We are not yet clear what they eat and how they live. There are theories that say they eat bacteria, dead skin and oil from sebaceous gland, but we are not sure. Demodex mites lay their eggs around the rim of pores(hair pores) they are living. They deposit very large eggs, almost one third the size of its body. Most probably they don’t lay more than one egg. One more interesting thing, is they don’t have an anus. As their feeding behaviour is unknown, we are not sure about how they remove body waste.

Video of a Demodex follicullorum laying an egg

These mites are mostly not harmful. They are associated with skin problems like rosacea, demodicosis and blepharitis (inflammation of the eyelids). Studies have found that people suffering from rosacea tend to have more Demodex mites. Instead of 1 or 2 per square centimetre of skin, the number rises to 10 to 20.

Most interesting animal eggs in nature

INFO OF THE DAY

Anatomy of a Spider

June 28, 2018
A beautiful image showing the internal anatomy of a spider. A spider's body is divided into two regions, Prosoma, anterior part and Ophisthosoma, the posterior part. Prosoma contains head, antenna and the legs. Everything else is self explanatory.
Read more

Ancestor of all placental mammals was an insect eater

What makes poison dart frog resistant to their own poison?

These electron microscopic images of human body will astonish you